When mariners started crossing the oceans, flags were an important communications tool between ships when at sea and even ashore. Lives depended on correct interpretation of their meaning, especially on fighting ships. Today, proper use of flags is not just a way to identify vessels and boating organizations, but to give important instructions, make announcements, warn of approaching storms, and mostly to honor and keep alive the naval traditions and seamanship spirit of those sailors that preceded us.

Flags have different shapes and colors depending on their function. A pennant is a flag that is larger at the hoist than at the fly and can be triangular, tapering or swallow-tailed. A burgee is the pennant that identifies a recreational boating organization. 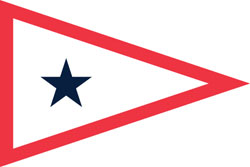 The Manhattan Yacht Club burgee has been flying high above New York Harbor for more than thirty years as a living proof that, after a long absence, recreational sailing was back in New York Harbor.

Photo: the Manhattan Yacht Club burgee is a blue star in the center of a white field wrapped with a red band. The correct way to fly the burgee is with the star pointing up. Care must be taken when hoisting because it is bad luck for any boat to fly the burgee upside down.

The colors of our burgee originate as a homage to where our Founder began sailing, the Bay Head Yacht Club in New Jersey. Members of that club encouraged Commodore Fortenbaugh to pursue his dream of reintroducing sailing to New York Harbor. To reflect this origin, the MYC burgee was created by wrapping the BHYC burgee with a band of red, making it “Red, White & Blue,” especially appropriate for sailing in front of the Statue of Liberty.

The original Manhattan Yacht Club burgee has been preserved since the Club’s founding in 1987. This burgee sailed around Cape Horn twice with French sailing legend Guy Bernardin who was trying to break the NY to San Francisco sailing record. After its second rounding, the burgee was retired and is brought out once per year to fly over the annual Commissioning Ceremony in spring. 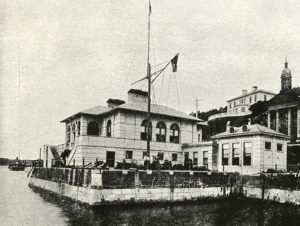 Photo: Clubhouse of the Royal Cork Yacht Club founded in 1720 (picture circa 1900). The flagpole includes a yardarm and gaff and is facing to the sea.

A Yacht Club building (or clubhouse) is traditionally considered to be a vessel and not part of land. It is meant to have a proper flagpole that mimics the mast of a large sailing ship. In addition, many of the masts in early Yacht Clubs were real masts repurposed from a large gaff-rigged sailing vessel.

The difference between a conventional land flagpole and a yacht club flagpole is the yardarm and a gaff pole which mimic the aft mast of a ship. At sea, the gaff was used to raise the mizzen sail and is the aft-most point on the vessel. Since the national flag is meant to be flown from the aft most point of a ship, it was flown either from a pole on the stern or hoisted on the gaff. Some ships also attached their national flag to the leech of their mizzen sail. 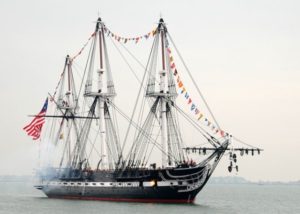 Photo: America’s most famous warship is the USS Constitution, nicknamed Old-Ironsides. She has been restored and available to see in Boston. Here Old-Ironsides displays the flag of the United States of America from her gaff and also flies signal flags in her rigging.

The traditions of the nautical flagpole are not commonly known among the public and often generate controversy because no flag is ever meant to flown in a position of greater honor than our national ensign. People see the club burgee flying higher than the national ensign. What they do not know is that in the naval world, the highest point of the mast is not the place of greatest honor. The place of honor is the aft most fly, hence the national ensign is flown from the gaff.

The orientation of a clubhouse flagpole is also important, as it should be positioned as the mast of a ship standing out to sea (gaff pointing inland). A clubhouse flagpole also flies the burgees of the Yacht Club officers, to recognize their rank and their presence at the club or vessel.

Photo: Members of the Club work together to raise our first flagpole in October 2016.

Our Club’s first flagpole was established by a group of visionary Members in 2016 at our new clubhouse in Jersey City. A subscription was held which received a significant outpouring of support, more than double what ended up being needed. The surplus of the subscription was subsequently used to outfit the front of the clubhouse with an awning. 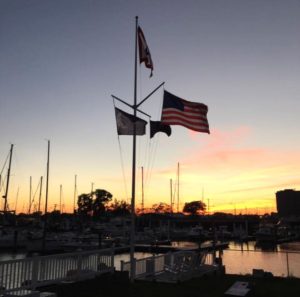 Photo: Our flagpole on a beautiful tranquil summer evening. You can sit on Commodore’s Deck in the rocking chairs below the flagpole and watch as the sailors head in and out each evening.

Flags on Your Vessel

Members may fly our Club’s burgee on their vessels from two locations while underway and at anchor. The more common is from a halyard under the lowermost starboard spreader. The more traditional is from a pig stick from the aft-most mast. Flying a pig stick indicates the yacht is in excellent trim because having the gear and skills to fly a pig stick denote a significant amount of knowledge and experience. The burgee should not be flown while racing. Powerboats which do not have mast may fly the burgee off a short staff at the bow. 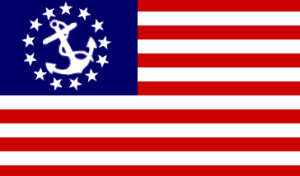 Another important flag for Members is the United States Yacht Ensign, the 13-star “Betsy Ross” flag with a fouled anchor in the union. While in US waters, the yacht ensign should be flown on recreational boats instead of the National ensign. In foreign waters, the 50-star national flag should be flown.

Our USCG-certified vessels which are not considered recreational, including the Honorable William Wall, Arabella and Admiral’s Launch, are all required by law to fly the national flag and not the yacht ensign. 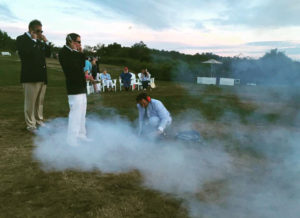 Photo: Frequent use of the Club’s cannon was seen during the 30th Anniversary Tour in 2018 when it is was fired every day at sunset.

The ceremony of hoisting the flags at 8.00 am and dousing at sunset is call “making colors”. When shorthanded, the national ensign should be hoisted first, followed by the club burgee and the officers flags if they are present at the club (on deck). All officers’ flags are hoisted on the same starboard halyard, highest rank on top.  Colors are hoisted smartly but lowered ceremoniously. Many yacht clubs salute the lowering of the colors with a cannon shot. Flags such as Race Committee flags, Gale warning flags, and special purpose flags can also be flown at a yacht club flagpole. 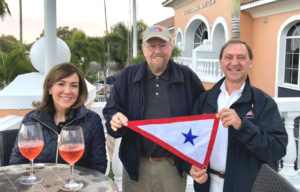 It is a nautical tradition to exchange burgees when visiting other yacht clubs or entering into reciprocity agreements. Members traveling to other clubs may purchase burgees in advance from our office. When exchanging burgees with another club, please record the exchange with a picture which can be included in our newsletter. In these cases, it is important that any picture displays the Manhattan Yacht Club burgee positioned in the right way, with the blue star pointing up as it flies on our flag pole!